Recently a comment was made on Twitter suggesting that around 80% of men polled in a UK survey were unaware of the where the prostate was or what its function was! I was quite amazed by this fact but thought that I would attempt to rectify the situation with the following explanation. Let me know what you think and as always if you have any questions, email or contact me on Twitter via @Drcchabert.

In essence, the prostate gland is a small gland that is located deep within the pelvis. It is wedged between the bladder above and the pelvic floor below. Its shape is similar to that of a donut in that there exists a hole in the middle through which passes the urethra or the outlet pipe of the bladder……. here lies an intrinsic design fault! Behind the prostate is the rectum or back passage. Its this arrangement which allows your doctor to feel the posterior side or back wall of the prostate during a “prostate exam”. 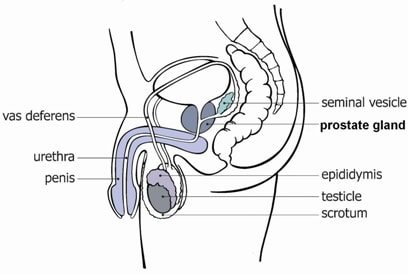 The prostate is part of the male reproductive system and its function is to produce prostatic specific antigen (PSA). PSA is a chemical that is assessed with a blood test to determine risk of prostate cancer. Physiologically, or naturally, however, its role is to liquefy semen or to make it less gluggy with a view to increasing the chances of conception. It is naturally found in tiny amounts in the blood stream and in larger concentrations in a man’s ejaculate fluid.

There are different conditions which affect the prostate. These include enlargement, inflammation or infection and the development of an abnormal growth or prostate cancer.

Going back to the design fault….. as men get older the middle portion or transition zone of the prostate increases in size. This is due, we think, to a cumulative exposure to the male hormone testosterone which causes the cells in the middle of the prostate to proliferate. As they do so, the gland gets bigger and with time there is compression or obstruction of the outlet pipe or urethra. This condition is called BPH or Benign Prostatic Hyperplasia which can result in progressive urinary symptoms in men as they get older.

Prostatitis or inflammation/infection of the prostate tends to be a condition that affects younger men and is characterised by pelvic pain and irritative urinary symptoms. The management for this condition depends whether there is a bacterial or inflammatory cause.

I hope this makes some sense and answer some questions. If you would like to know more have a read of the rest of our site or Tweet your questions to @Drcchabert so that others can learn too.